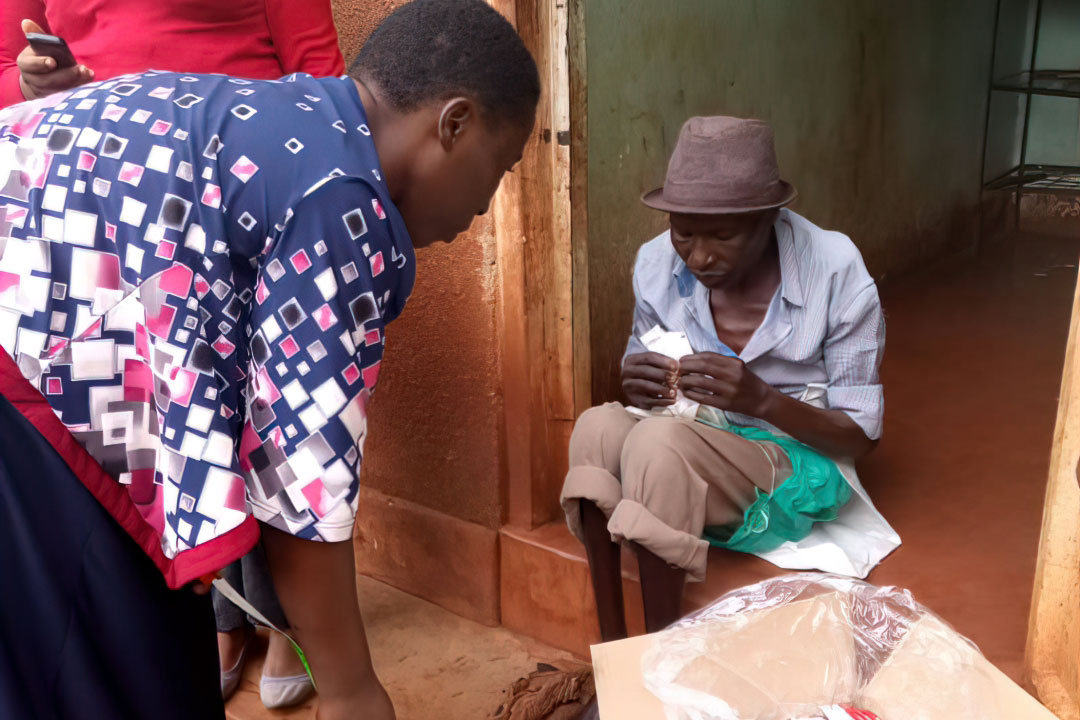 Doreen, a psychosocial counselor at the AIDS Support Organization (TASO) Health Center in Jinja, Eastern Uganda, recalls the day she visited a weak and emaciated patient named Moses. She found him, bedridden and suffering from chronic diarrhea and vomiting, swollen legs, and intermittent fevers.

Fortunately, USAID’s Regional Health Integration to Enhance Services in East Central Uganda (USAID RHITES-EC) Program was supporting the TASO Jinja Center with implementation of a ‘Surge’ plan, a focused effort to accelerate HIV treatment services by identifying HIV-positive patients and encouraging them to be tested, start early treatment, and stay in care.

RHITES-EC had encouraged HIV-positive clients (referred to as “experts”) to identify people in their communities with persistent illnesses or HIV-related symptoms. The TASO Center sent Doreen, the psychosocial counselor, to visit and test Moses for HIV, based on a referral by Moses’ sister, an expert client in the community. Moses (59), had lived on Kakyanja Island on Lake Victoria as a fisherman for 40 years but had returned home and was very sick. Based on his symptoms and his previous occupation as a fisherman – a population highly susceptible of contracting HIV – Doreen suspected that Moses might have HIV.

From Death’s Door to Living a Full Life

Moses received counseling and agreed to an HIV test, which came back positive. He was clinically evaluated and initiated on antiretroviral therapy. He is now walking with a cane – which has improved his mobility – and is well nourished.

Once identified as HIV-positive, a clinician assesses the nutritional status of the patient and carries out other medical and psychological assessments. Severely malnourished clients are provided with ready-to-use therapeutic food and once improved, are supported to prepare small home gardens to grow dark green leafy vegetables to supplement their diet and boost their health and immunity.

“Moses would have died, if we had not reached him in time,” Doreen said. “Our aim is to ensure that he adheres to treatment and is virally suppressed.” The Taso Jinja team visits client homes several times to deliver medication and assess their overall health until clients can travel to the clinic on their own to pick up their medications.

Patient referrals have helped the Taso Jinja team to identify many HIV-positive individuals. Between February 2018 and April 2019, the team identified an average of 15 new clients per week and provided psychosocial support to them. Over this same time, the Center has begun HIV treatment for 1,400 new HIV-positive individuals, achieving a general viral suppression rate of 94.8 percent and a rate of 96.9 percent for adults aged 25 years and above.

With the help of Doreen and her colleagues at the TASO Jinja Center, Moses and others in his community can live active and productive lives.