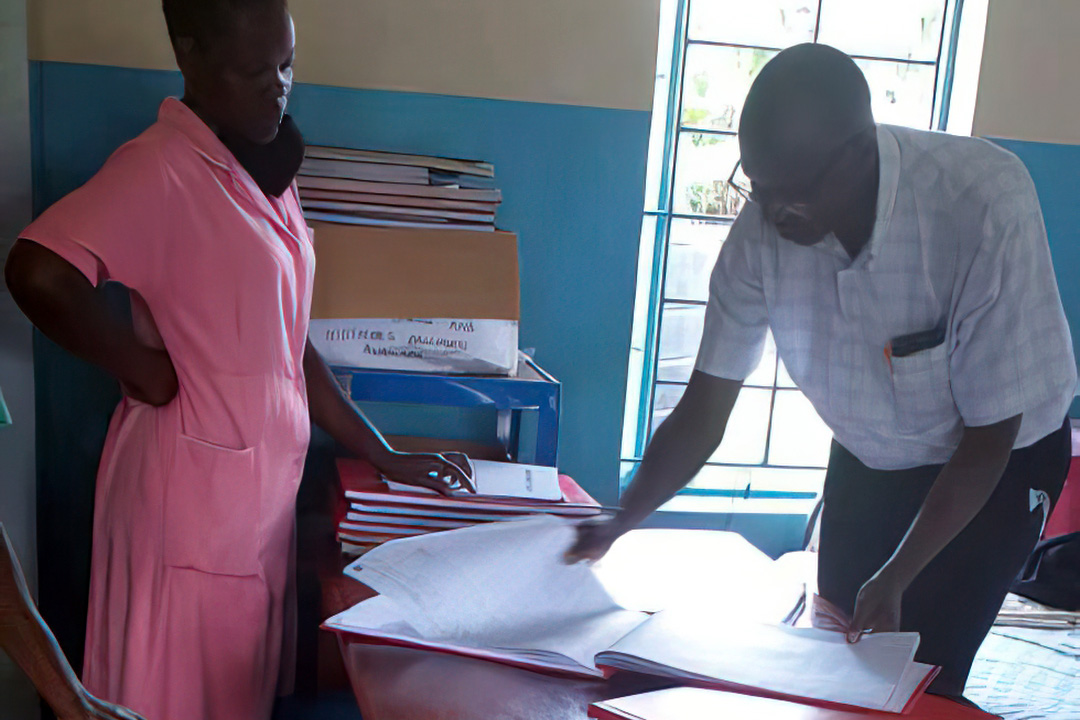 Listening to communities and providers is as important for conquering malaria as mastering the science behind malaria testing, treatment, and tracking.

This has been a key lesson for Dr. Rogers Twesigye, who is responsible for leading the coordination and implementation of the malaria component of the USAID Regional Health Integration to Enhance Services (RHITES-EC) activity – implemented by URC – and for coordinating with the National Malaria Control Program in Uganda. RHITES-EC supports the Uganda’s Ministry of Health (MOH) to improve regional health outcomes by increasing the use of high-quality health care services within 12 districts in East Central Uganda.

Malaria captured Dr. Twesigye’s attention early in his medical career. After graduating with a degree in medicine from Mbarara University of Science and Technology in Uganda and completing his clinical internship, he worked at Ibanda Hospital for three years and encountered frequent malaria cases.

“Patients with malaria contributed to more than 50% of the cases admitted to Ibanda hospital,” Twesigye said, making it the most common disease in his patients.

Twesigye’s post-university training and work experience deepened his knowledge and further developed his skills in management of severe malaria cases.

As the Project Manager for the UNITAID-funded Improving Severe Malaria Outcomes project, he coordinated research efforts which contributed to the change in World Health Organization (WHO) and MOH treatment policy on severe malaria from the use of injectable quinine to the use of injectable artesunate. More than 240,000 patients benefit from this change annually in Uganda alone. When he joined URC, this experience was critical in supporting health facility staff to adopt the revised MOH and WHO guidelines.

Twesigye also learned that URC’s quality improvement (QI) methodology could lead to sustained changes in how providers managed severe malaria. URC’s QI process works by supporting teams to continually identify performance gaps, analyzing data and identifying root causes and potential solutions, and iteratively testing and adapting these solutions. Through the QI process, the facility teams acquire the skills to solve problems, which leads to sustainable improvements in patient care. One component of URC’s QI approach is behavior change, which is critical for providers to ensure quality care, as it was for adopting the new malaria treatment.

“You can’t only train them on new guidelines and expect them to change,” Twesigye said. “Using collaborative QI and social behavior change approaches, we can change mindsets.”

“In medical school in old times, they all learned that a negative slide does not rule out malaria. So they referred to their former training,” Twesigye said.

Working closely with providers and using QI processes – including planning, developing, and testing the strategy, then reassessing and responding – providers came to understand that the quality of microscopy and rapid diagnostic tests to detect malaria had improved significantly. Providers also learned to recognize other common causes of fever, such as respiratory tract and urinary tract infections.

As a result, the RHITES-EC activity has achieved success with the implementation of Uganda’s test, treat, and track policy. This policy aims to have all fever cases tested for malaria and ensure that only individuals with positive malaria tests receive the appropriate malaria treatment.

Accordingly, the proportion of confirmed malaria cases at health care facilities in the East Central Uganda that were appropriately treated with antimalarial drugs increased from 60% in October 2016 to 98.4% in June 2020, well above the national targets. In addition, the percentage of patients with negative results who were inappropriately treated for malaria declined from 44% in 2016 to 4.3% in June 2020.

To change behavior at the community level, Twesigye learned the importance of respectfully engaging communities and listening to their concerns. He also explained the importance of recognizing urgent community priorities. When he learned that community members were using the bed nets to cover termite mounds and capture them for food during a drought, he said, “There was a shortage of food because of drought. The community was desperate for survival. There was no point in scolding them for improper bed net use when they were facing an existential crisis.”

Instead, RHITES-EC has leveraged community dialogue sessions to engage community members, listen to their concerns and fears of insecticide-treated nets, and subsequently find a way to engage them to appropriately use the insecticide treated nets as well as take up other healthy practices to prevent malaria.

Twesigye also provides technical support to the National Malaria Control Program for guideline development and has served on the multi-stakeholder team that conducted a midterm review for the Uganda Malaria Reduction Strategic Plan, 2014-2020.

When Twesigye is not working tirelessly to support the prevention and treatment of malaria for RHITES-EC, he enjoys watching his favorite football team, Arsenal, and spending time with his wife and four children.