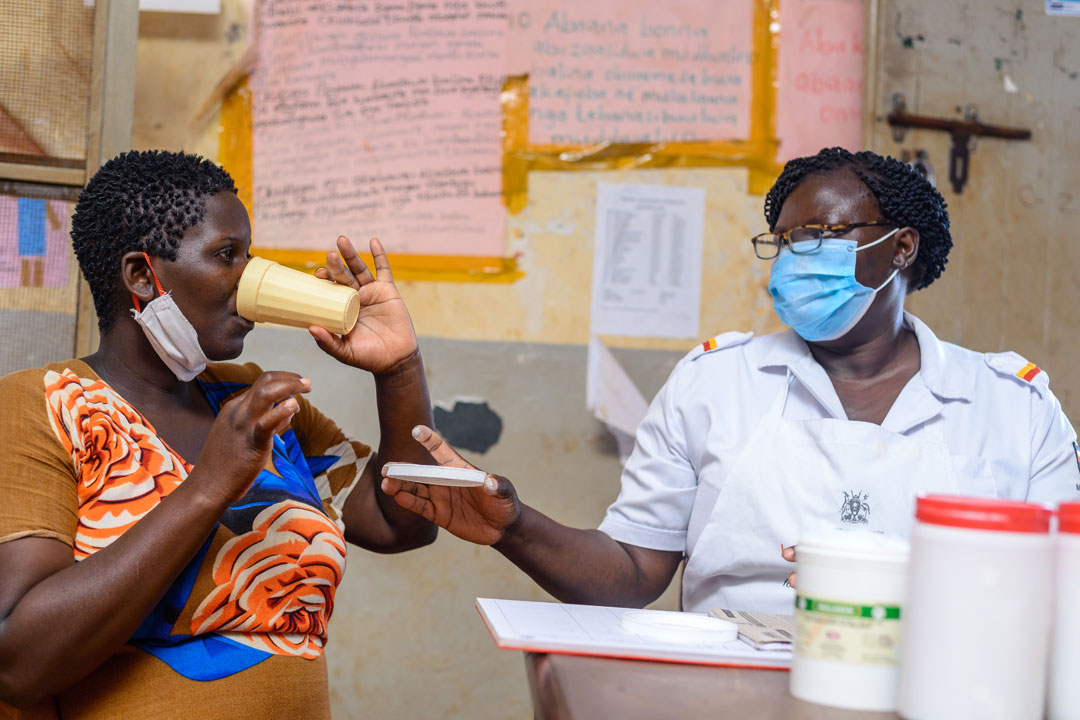 A pregnant woman receives Fansidar for malaria prevention from a health worker during her routine ANC visit at Bugembe Health Centre IV, Uganda

Barbara, age 26 and seven months pregnant, had a high temperature, lower abdominal pain, general body weakness, a headache, and was vomiting. She was also bleeding.

Barbara had tried to treat these symptoms for a week by taking herbs. When she did not improve, she went to Lubira Health Centre (HC) II in Bugweri District and was immediately referred to Busesa HC IV, where a rapid diagnostic test revealed that she had malaria. And a laboratory test indicated that she had a high number of malaria parasites.

“To determine the cause of bleeding, a scan was done at Iganga General Hospital that showed that Barbara had abruptio placentae – the premature separation of the placenta from the uterus,” said Dr. Ishaq Sabaidu, Medical Officer at Busesa IV.

Barbara lost her baby and was on the verge of losing her life. She had unfortunately not fully appreciated the importance of taking sulphadoxine-pyrimethamine, often called Fansidar. The medication for the prevention of malaria in pregnancy had been prescribed and dispensed to her at two antenatal care (ANC) visits. She was lucky to survive.

The Uganda Ministry of Health recommends the provision of three or more doses of intermittent preventive treatment (IPTp3) with Fansidar for malaria prevention during pregnancy. All pregnant women accessing services at health care facilities in Uganda receive at least three doses of Fansidar from the second trimester to reduce malaria episodes, maternal and fetal anemia, placental parasitemia, low birth weight, and mortality.

In Barbara’s case, the policy had not been carried out as intended, partly because of uneven medicine stocks, insufficient clean drinking water at health care facilities, inadequate health provider knowledge about the treatment, late ANC visits by pregnant women, and community concerns about the safety and efficacy of the medicine.

To address these obstacles, the USAID Regional Health Integration to Enhance Services in East Central Uganda (USAID RHITES-EC) Activity supported more than 250 health care facilities in the 12 East Central Uganda districts supported by the project  to implement a number of proven quality improvement interventions. The interventions are based on a successful pilot conducted in 2018 by RHITES-EC addressing the key barriers to the uptake of IPTp3 among pregnant women receiving ANC at 25 health care facilities across several districts in East Central Uganda.

Client-focused interventions aimed to change perceptions and behaviors about the safety and efficacy of the drug. Interventions included: conducting tailored, regular community sensitization meetings and health education sessions for all pregnant women attending ANC sessions to address concerns and emphasize the importance of taking Fansidar; and establishing a directly observed therapy corner in the ANC clinic with safe drinking water and clean cups to ensure that pregnant women take their Fansidar medication while at the health care facility.

As a result of these interventions, coverage of IPTp3 for pregnant women in East Central Uganda increased from 36% in October 2019 to 98% in September 2020.