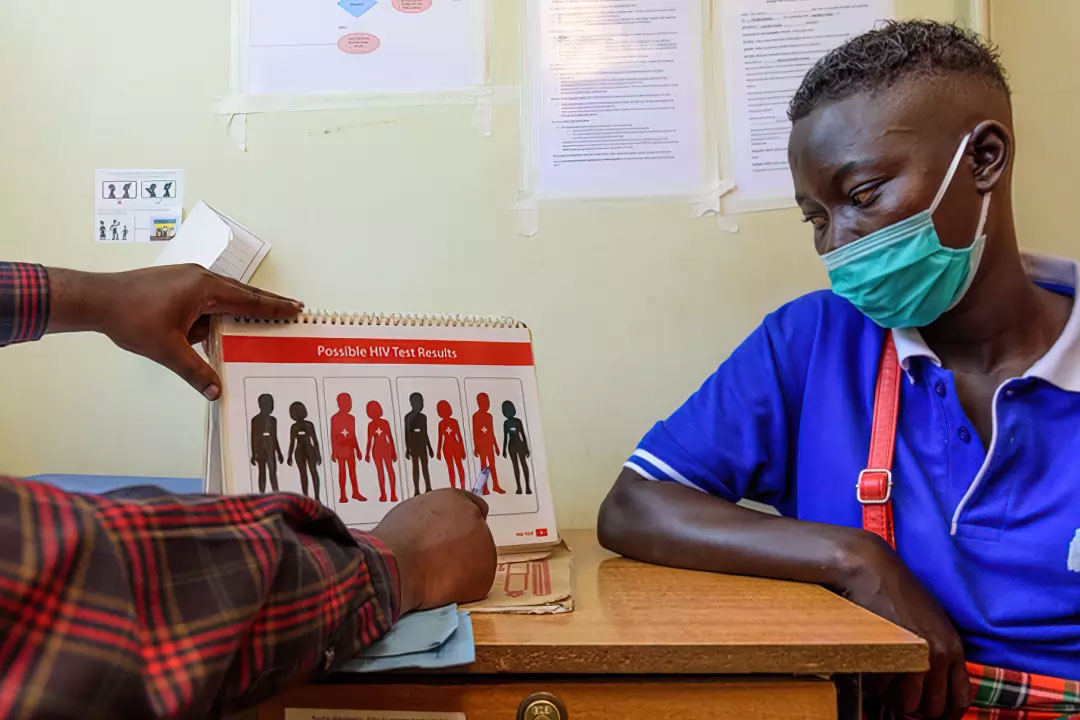 Forty-five-year-old Ikoba Ssuba felt unwell with a fever. He visited Iganga General Hospital and received a thorough health check-up. As he waited to see the clinician, he had the opportunity to hear Betty Atyama, a counselor in the hospital’s outpatient department (OPD) discuss the benefits of HIV testing. Shortly after the health talk, a counselor asked Ikoba if she could assess his eligibility for an HIV test. Ikoba consented. He received the HIV test which indicated he was HIV-positive.

In addition to receiving treatment for the fever that brought him to hospital that day, Ikoba received post-test HIV counseling. He was encouraged to immediately start on HIV antiretroviral treatment (ART) to reduce the amount of virus in the body and did so right away.

The counselor inquired about Ikoba’s sexual relationships using a standardized index testing tracker and an assisted partner notification screening tool. Ikoba was married to two wives and had six children who could possibly be at risk of HIV. The counselor coached him on how to disclose his HIV status to his wives and encourage them to visit the hospital for HIV testing. Ikoba agreed and promised to escort his family to get an HIV test. Betty Atyama, the counselor, responsible for risk-based HIV testing services, gave Ikoba her mobile number and reassured him that she would be available when his family came for testing.

“I was scared to tell my wives that I’m HIV positive, but the counselor assured me that I could do it, and I did” said Ikoba.

Two days later, Betty received a call from Ikoba. He had arrived at the OPD with his wives and six children. Ikoba’s wives and his youngest child tested positive. They received post-test counseling and were started on ART.

Ikoba is confident that he and his family can live healthy and fulfilled lives because they started on ART while their bodies are still strong.

The URC-led USAID Regional Health Integration to Enhance Services in East Central Uganda (RHITES-EC) Activity provides support to Iganga Hospital to improve the quality and yield – or the proportion of HIV tests performed that are positive – of HIV testing. The following improvements have been made to facility-based HIV-testing:

Health workers have not only been provided with HIV risk screening tools but have also received mentorship and facility-based coaching to document testing outcomes using an index testing tracker and an assisted partner notification tool.

The tools guide health professionals to discover if a client is eligible for HIV testing or associated with others living with HIV. Clients that receive HIV positive results are referred to ART clinics that provide medicines and periodic reviews of patient prescriptions. Clients benefit from certified psychosocial support, group therapy, health talks, advice on achieving and maintaining viral suppression, and linkage to other health services such as TB testing and prevention and nutrition, immunization, and family planning services.

Such success in improving HIV testing yield is making a difference in the lives of clients like Ikoba and his family.