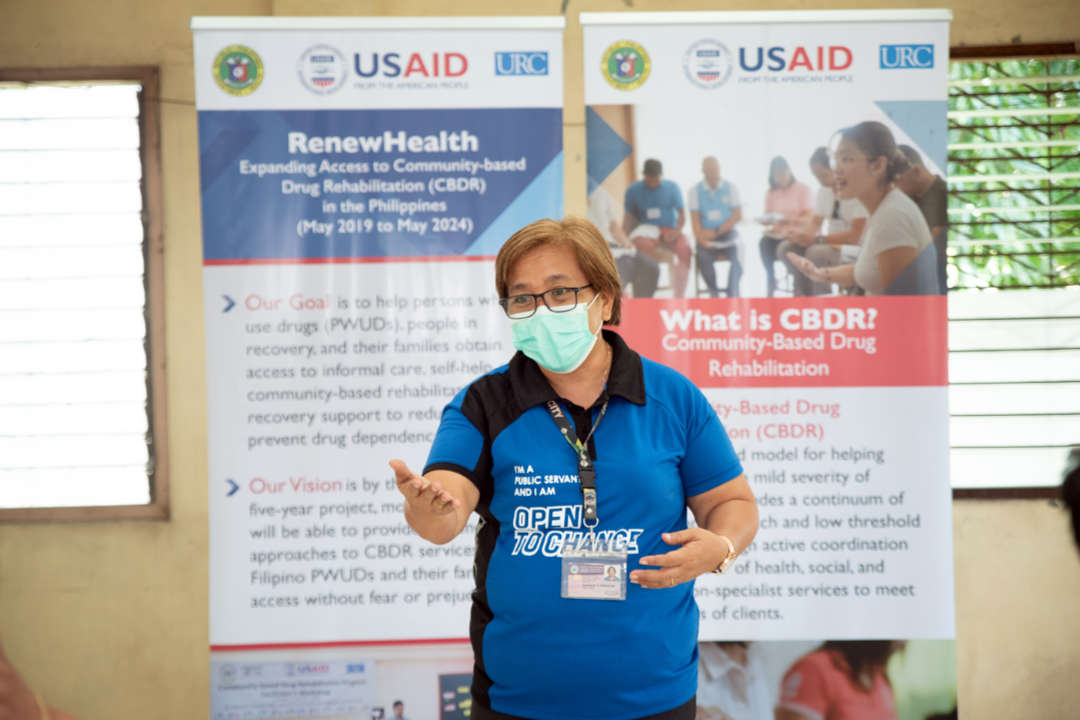 Rosalie Porcelin, a licensed social worker in General Santos City, located in southern Philippines, starts her day with a prayer for strength, perseverance, and faith that she will be able to help her clients. She has been doing social work for 23 years.

Following a nationwide campaign against illegal drugs in 2016, Porcelin was appointed coordinator for the city’s Community-Based Drug Rehabilitation (CBDR) program to address an increase in persons who use drugs (PWUDs) looking for treatment, particularly plea-bargainers – those incarcerated for drug use who can be released after completing a CBDR program.

“When I entered this role, I did not know how to start. We used whatever tools were available to screen clients for drug use and run outpatient programs,” Porcelin said.

Engaging with the Private Sector

At the time Porcelin became involved with the city’s CBDR programming, SeaOil Foundation – a fuel company with facilities in General Santos City – took an interest in tackling the illegal drug problem through their corporate social responsibility endeavors. SeaOil Foundation Executive Director Jess Lorenzo reached out to General Santos City Mayor Ronnel Rivera, who spearheaded the Likhay Droga drug prevention program that had been given a 2017 Galing Pook award for innovative practices by local government units.

“We were especially interested in rebuilding trust during the disruptive, divisive, and deadly context of the drug war,” said Lorenzo. SeaOil Foundation previously supported another localized version of a family drug abuse prevention program.

General Santos had used the Matrix Intensive Outpatient Program for their clients before 2019, However, clients were dropping out because of the length of the program. The city needed a CBDR program for low and moderate risk clients, according to Porcelin and her team. She also wanted a grassroots-oriented program where barangays, or villages, could help service clients and their families.

The Right Program for the Community

Determined to find a treatment program for the people in their community, Mayor Ronnel Rivera and SeaOil Foundation approached the URC-implemented USAID RenewHealth Project. RenewHealth aims to expand access to CBDR by building the capacity of local government units to deliver evidence-based and compassionate treatment. The project recommended the use of a culturally adapted and evidence informed Katatagan, Kalusugan at Damayan ng Komunidad (KKDK), or Resilience, Health and Care in the Community program that offers drug recovery and life skills and family development sessions. This program was endorsed by the Inter-Agency Committee on Anti-Illegal Drugs to the Dangerous Drugs Board as a model for local government units.

In December 2019, General Santos City, SeaOil Foundation, and USAID signed a Memorandum of Understanding to formally launch the KKDK program in the city. While USAID agreed to bring technical expertise, SeaOil Foundation committed to support the training of CBDR facilitators and fund construction of a new outpatient facility. General Santos City committed to implement an evidence-based and compassionate CBDR program to serve clients in its 26 barangays and allocated the land  in Barangay Tambler   for the General Santos City Substance Abuse and Rehabilitation Facility.

Training for Porcelin and over 100 CBDR facilitators from all 26 barangays of the city began that same month. Meanwhile, SeaOil Foundation broke ground for the new building.

“I knew we finally found the right program for our clients and we started using it immediately!” Porcelin said.

At the time there were more than 4,000 clients in the city that needed CBDR treatment. Many were plea-bargainers. In the KKDK program’s first year, the number of clients screened, enrolled, and completed the CBDR programs more than doubled.

“Because we were finally implementing a culturally sensitive CBDR program that was appropriate to moderate risk clients, in just 16 weeks, we produced graduates who completed our CBDR program,” Porcelin said. The number of clients screened increased by 120%, those enrolled by 180 percent, and those who completed treatment increased by 90%.

Lorenzo said: “The partnership between SeaOil Foundation, the local government of General Santos City, and USAID is an example of how government, private sector, and international development agencies can work together to establish systems that provide care and pursue clear outcomes.”

Among those who were treated was Fritz, a former drug user who was imprisoned for six years before joining the first batch of plea-bargainers to complete the CBDR program.

“The KKDK program modules taught me how to avoid triggers of drug use, as well as how to communicate assertively and say no to drugs,” Fritz said. “More importantly, it reinforced the importance of family support. But my journey does not end here. I now want to help others like me who need rehabilitation and treatment.”

Fritz now assists those who want to participate in plea bargaining and CBDR treatment. He helps facilitate the KKDK program in his barangay and is President of the Community Drug Free Federation of Individuals in General Santos City.

There is hope for others like Fritz as the local government of General Santos City remains committed to providing CBDR services. Meanwhile, SeaOil Foundation just completed construction of the outpatient facility, which includes private counseling rooms, a training center, and a gym. The building will be open by 2022.

Porcelin concludes: “My passion is to help people. When I witness my clients change, when they can recover and live normal lives without fear – that is my greatest achievement. To see them living decently with their families and becoming productive members of their communities – that shows that recovery is possible with CBDR.” 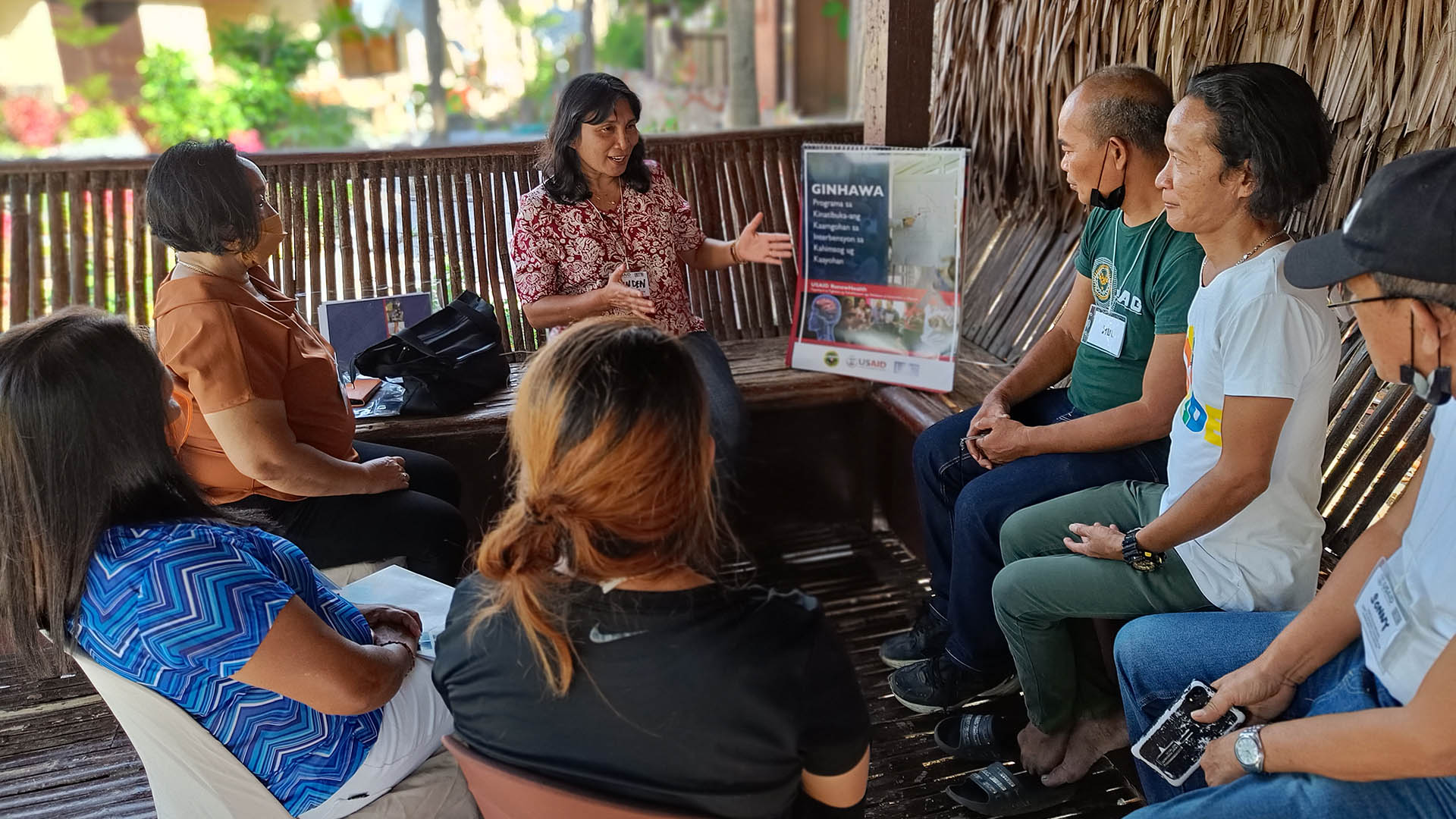