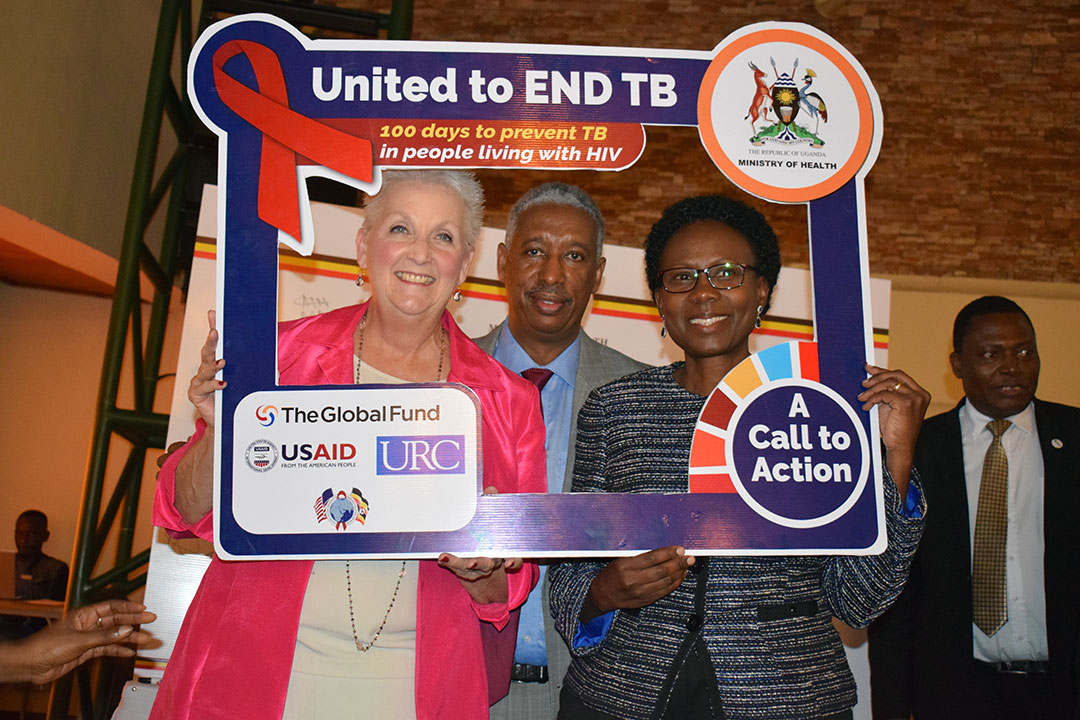 HIV infection is the strongest risk factor for a person to develop tuberculosis (TB), and TB is responsible for over a quarter of all AIDS-related deaths worldwide. In Uganda in 2017, 40 percent of TB patients were co-infected with HIV. Despite 94 percent of TB/HIV co-infected patients initiating anti-retroviral therapy (ART), there is a 12% mortality rate within this population. Treatment of TB with the drug isoniazid can reduce TB-related deaths among People Living with HIV (PLHIV) by 39%, independent of ART.

On July 3, Ugandan Minster of Health, the Hon. Dr. Jane Ruth Aceng launched an ambitious 100-Day Accelerated Isoniazid Preventive Therapy Scale-Up Plan in Kampala stating: “Time is not on our side, we must deliver, we want to see action…”

The 100-day plan aims to prevent TB among PLHIV by:

URC’s USAID Defeat TB Project supported initial activities to scale up IPT in Kampala, Wakiso, and Mukono, as well as in other USAID-supported regions by using a system strengthening and quality improvement (QI) approach. District leadership was engaged in mobilizing sites and addressing supply chain challenges, while Defeat TB rolled out IPT tools and facilitated regional and district QI coaches to build health worker skills in IPT initiation, follow-up, and data management. USAID Defeat TB provided technical guidance in the development of national guidelines demonstrating that a rapid scale-up of IPT was indeed possible. The Project supported the National IPT Taskforce develop the scale-up plan and the implementation and coaching guide.

The IPT Plan will assist managers, service providers, and other stakeholders at all levels of the health system plan and implement the rapid initiation of PLHIV on IPT and ensure adherence and completion for all on therapy.

Over 250 participants attended the launch event including the US Ambassador, Deborah R. Malac; the WHO Country representative, Dr. Yonas Tegegn Woldemariam; the Permanent Secretary, Ministry of Health Dr. Diana Atwine; district health officers from 112 districts; representatives from USAID and the Centers for Disease Control; implementing partner organizations; executive directors of hospitals; representatives from civil society organizations; and the media. Others from around the country joined the meeting virtually via teleconferencing.

Keynote speakers from the Ministry of Health, the U.S. Government, the World Health Organization, and civil society organizations reiterated that this plan is needed and pledged their support to contribute to achieving the targets set.

The launch was jointly organized by the Ministry of Health’s AIDS Control Program (ACP) and the National TB and Leprosy Program (NTLP) with support from USAID, CDC, the Global Fund, USAID Defeat TB, and the Communication for Healthy Communities Project.